The Changing Meaning of Evolution

The Meaning of "Evolution" Changes As Needed 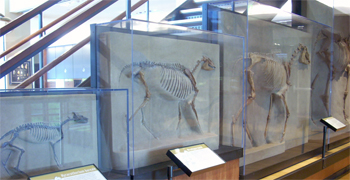 When it comes to biological evolution, the word "evolution" has two meanings. To prove evolution is true, it is first spoken of in one way, that is accurate and true. Then the meaning shifts in declaring that molecules to man evolution is true. It's a logical fallacy called equivocation. Here is how it works. We'll use the hot dog example from the video:

In this simple example it is obvious something is wrong. As with many words, the word "nothing" can be understood in different ways. What the first line is saying is that having a hot dog is better than having nothing at all to eat. It's better than going hungry. That's actually a derogatory statement about hot dogs.

The second line uses the word "nothing" in a different sense. In this case "nothing" refers to all other foods. This line is saying, "there is no other food that is better than steak." The meaning of "nothing" here is very different than in the first line.

The third line makes the assumption that the word "nothing" always means the same thing, in this case an unknown object referred to as a "nothing." The logical conclusion, based on misunderstanding how the word "nothing" is used, is that steak is better than hot dogs.

The following is the evolution example from the video. This is a very common way promoters of evolution "prove" evolution is true.

There Are Two Definitions For Evolution Used

Gerald A. Kerkut (1927-2004), Professor of Physiology and Biochemistry at the University of Southampton defined evolution in 1960:

“There is a theory which states that many living animals can be observed over the course of time to undergo changes so that new species are formed. This can be called the ‘Special Theory of Evolution’ and can be demonstrated in certain cases by experiments. On the other hand there is the theory that all the living forms in the world have arisen from a single source which itself came from an inorganic form. This theory can be called the ‘General Theory of Evolution’ and the evidence that supports it is not sufficiently strong to allow us to consider it as anything more than a working hypothesis. It is not clear whether the changes that bring about speciation are of the same nature as those that brought about the development of new phyla. The answer will be found in future experimental work and not by the dogmatic assertions that the General Theory of Evolution must be correct because there is nothing else that will satisfactorily take its place.”

Believers in evolution refuse to accept the distinction between STE and GTE, because once they do, "evolution" is a dead theory, easily proven impossible. The GTE has NEVER been observed. But, it is obvious that STE is so broad and inclusive that it actually does not define. A definition must be specific enough such that what it describes can be clearly understand. STE and GTE are two very different things, and that means the word "evolution" must be taken to have different meanings. (Which is common for many English words.)

Let's substitute the correct usages into the above statement:

Yes, it is a little awkward to read, but when expressed this way it obviously makes no sense. But, this is exactly what evolutionists are saying. In other words they speak nonsense, using words to make it sound scientific and switching the meaning of evolution in the middle of the sentence. Don't fall for this deception. It is the #1 tactic used to "prove" evolution is true, and it is a complete deception.

An Example From Scientific American

The following is the concluding paragraph from a December 18, 2011 article on the Scientific American blog

The point is that all kinds of creatures, from the smallest insects to the largest mammals, are undergoing speciation right now. We have watched species split, and we continue to see them diverge. Speciation is occurring all around us. Evolution didn't just happen in the past; it's happening right now, and will continue on long after we stop looking for it.

The article describes speciation, then makes the jump to "evolution." In a plain, straight forward reading by an average person, what is the final paragraph implying? That because we see speciation (and everyone agrees that is true), then evolution -- molecules to man evolution -- is true. That is a conclusion that is not supported by the evidence. Speciation results in variation, but it has never been observed to result in a new kind of life. Yes, we have many species of rabbits, but they are all still rabbits. We have many species of salamanders, but they are all salamanders. Speciation (variation) is being defined as "evolution," and then used as the "proof" evolution actually happens. That's equivocation. Variation is not evolution.

Not Even Wrong (ICR)