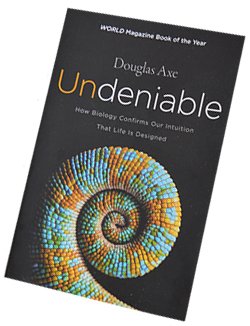 Douglas Axe tells his story in his book "Undeniable." It is as much about how the evolutionary mindset denies even the most obvious scientific facts (if they oppose evolution) as it is about those facts. But just because evolutionary molecular biologists refuse to accept the facts, that does not mean you must also ignore reality. A large part of this book is aimed at making the facts, that prove evolution impossible, understandable to the average non-molecular biologist. The issue isn't that the science is difficult, it's that the numbers are so huge that they have no meaning.

Without proteins there in no life

How big is 10 to the 74th power? That's the number ten followed by 74 zeros. That's how many random attempts would need to be made in order to produce one protein. And it takes a lot more proteins to even begin to make life. The simplest cell has 300 proteins. In addition, the universe outside of a living cell is hazardous to proteins, so they'd quickly be destroyed. But Dr. Axe only only deals with the first part, the impossibility of forming a functional protein without having pre-existing instructions, and the biological machinery for assembling the protein.

It has been determined that in all of our universe, based on a 13 billion year (plus) age of the universe, anything that requires more than 10 to the 40th power opportunities to happen, will NEVER happen. That's a certainty. It is the definition of impossibility. Here's a video to help you understand how impossible it is for a functional protein to form by random chance and how big these numbers are:

It is impossible for even one protien to form as a result of random actions. Evolution is impossible. That's a fact that is undeniable.

Plant geneticist: Darwinian evolution is impossible (CMI)
Is There Evidence Against Evolution? (ICR)
The Probability of Evolution (CMI Video 28:32)

Do Miracles Mean The Bible Is A Fairy Tale?

Was Jesus' Resurrection Real or Fake?

Do Babies Go To Heaven?

Can We Know God Exists?

The Age of the Earth - Helium In Rocks