People Used To Be Exhibited In Zoos 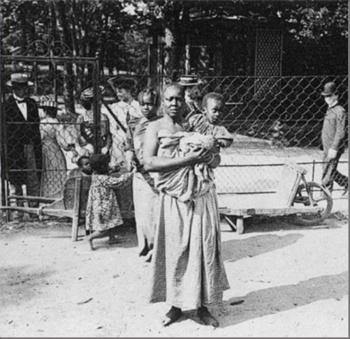 World War II resulted in more than a military defeat of axis powers, it was also a defeat for those putting evolution into practice. The logical results of evolution are practices such as eugenics, racism, elitism, and... human zoos. Fortunately, in the case of human zoos the practice was ended prior to WWII as the result of hte protests and efforts of a black pastor in New York City.

Have you heard of Old Sturbridge Village in Massachusetts? It is a reconstructed New England town from the late 18th century... with actors in the town living as people did in the 18th century. You can see exactly what life was like, and even talk with "18th century people." Is this a human zoo? No. The people are employed actors who can quit and leave any time they wish. And the purpose of Old Sturbridge Village is to educate visitors about 18th century life in New England.

There were some human exhibitions (zoos) in the late 18th century and early 19th century, with paid residents, who demonstrated what life was like in other parts of the world. If they were paid, and not brought their against their will, nor held against their will, I would consider them to be like Old Sturbridge Village. But most were not like this. People were purchased or taken captive in other parts of the world, and put on display in zoos to show evolution. Australian aborigines, Africans, Filipinos, and others were considered to be lower forms of "sub-human" life... living "evolutionary transitions" between apes and humans. Europeans were considered pinnacle of evolution, and as such had the right to capture and put on display the "lower," less evolved races. These were humans in zoos.

Ota Benga, a Mbuti Pygmy, was born in Colonial Congo. He became famous, and was one of the more better-know people exhibited in zoos. He grew up as a free man in Colonial Congo. Just after the turn of the century he was captured by slave traders who put him in chains. He was put to work as a slave on a farm.

In 1904 he was found by an American businessman named Samuel Verner. Verner had been sent to the Congo to find authentic African pygmies who could be displayed as evolutionary "missing links" at the 1904 St. Louis World's Fair. Verner bought Ota Benga for a pound of salt and a bolt of cloth. It paid off big time for Verner. Benga was the big hit of the fair. At one point the national guard was called in because of the huge crowds.

In 1906 he was added to the exhibits at the Bronx Zoo as a part of a display about human evolution. He was allowed to roam freely within the zoo, but his hammock was a part of the primate exhibit. He slept with the apes.

When evolutionary thinking is put into practice, it is not good for humanity. People are killed, enslaved, and hurt. It's happening today, as explained in the video below. Evolution is an infection that destroys society and lives.


For More About Human Zoos:

Ota Benga: The Pygmy Put on Display In a Zoo (CIM)