MegaSequences Result From A Global Flood

Megasequences Could Only Be Created By A Global Flood

In the 1960s, using the cores from oil drilling, geologists determined that there were four megasequences of sediment, at times thousands of feet thick, spanning the North American continent. Since then they have determined there are six megasequences, some of which span multiple continents (transcontinental rock layers), and even go around the world.

A megasequence is a group of sedimentary rock layers that have flat, eroded surfaces at their tops and bottoms. These are called unconformities. The layers of sediment within a megasequence is characterized by the grains making up the sequence becoming smaller and smaller the higher up they are. There expected sorting is: rocks (conglomerate) at the bottom, then sand, shale and this all is sometimes topped by limestone. But, this idealized arrangement is rarely seen.

How do secular geologists explain megasequences?

In the video the Saul Megasequence was mentioned. Here is how it's formation is explained:

"At its peak, most of North America was covered by the shallow Sauk Sea, save for parts of the Canadian Shield and the islands of the Transcontinental Arch. The stratigraphy of the Sauk sequence indicates shallow-water deposition, primarily consisting of well-sorted sandstones and clastic carbonates. A marine regression ended the Sauk sequence early in the Ordovician." - Wikkipedia, January 26, 2020 - https://en.wikipedia.org/wiki/Sauk_sequence 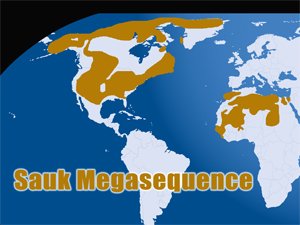 Note that they simply call it a sequence and do not mention that it extends into Africa (and possibly other continents - research is ongoing). In Africa these sediments layers are given a different name. However, geological and chemical analysis reveal that the sediments in Africa are exactly the same as those in North America, including having the same source. Giving them a different name, which is common, does not mean they are different.

They say these sedimentary deposits resulted from a shallow sea that covered most of North America. And that is what I was taught in high school decades ago. But, a shallow sea does not match the evidence. Not even close. Notice that the description includes: "well-sorted sandstones and clastic carbonates." Sorting by size does not occur in a shallow sea over millions of years. As was seen at Mt. St. Helens, sorting results from moving water over a short time period. The amount and depth of the water can be determined by examining the sorting and crossbedding of the sediment. Crossbedding results from giant sand ripples created by flowing water. Based on the evidence the Sauk Megasequence was laid down by water over 600 feet deep, and moving at between 2 and 3.5 mph. Not a shallow sea at all. The large boulders in the conglomerate at the bottom indicate that the timespan was short... days, not millions of years. (The boulders had to have been moved and buried over a short time span.)

The evidences we see in megasequences is that there was a catastrophic, global flood, that took place over a short time span.

A Deeper Understanding of the Flood—A Complex Geologic Puzzle (AIG)