Jesus' first sign displayed His glory and His disciples believed in Him. (John 2:11) 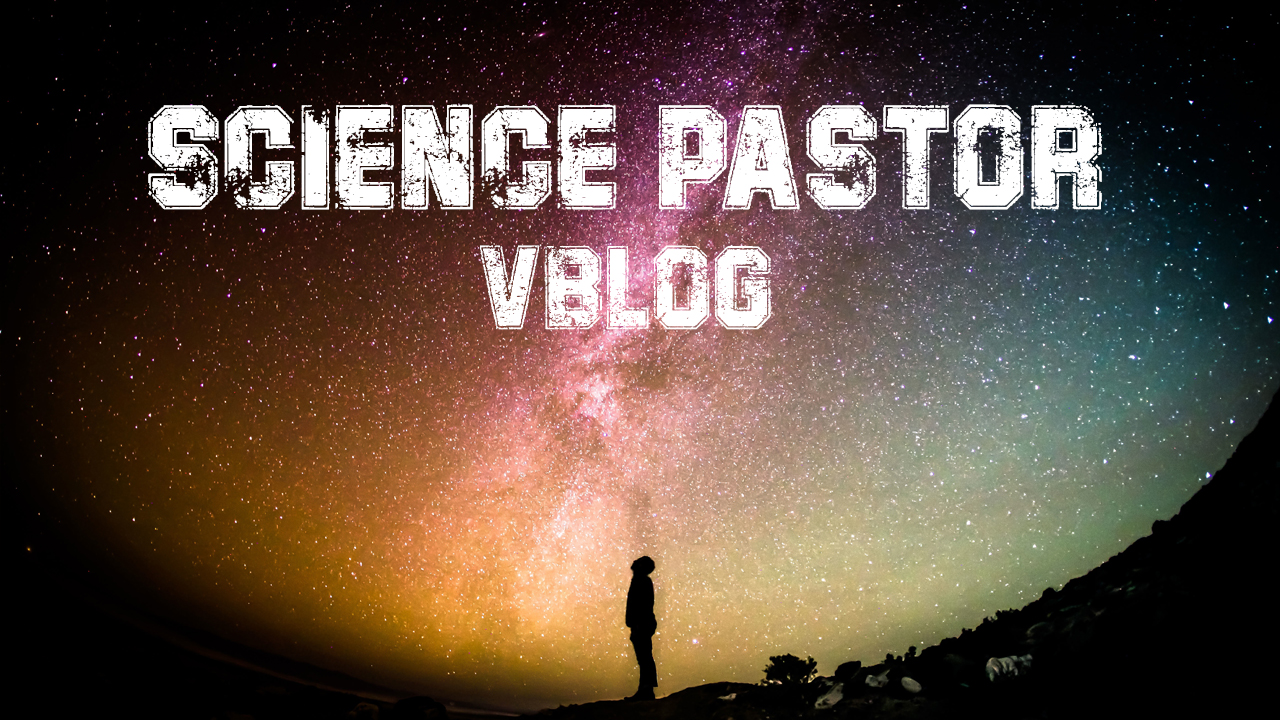 Welcome to the first Science Pastor vBlog post. In this vBlog Pastor Steve addresses the accusation that, if God is allowed as a potential cause, then it is impossible to do science. Thus only natural causes may be allowed.

Welcome to the Science Pastor program... my name is Steve and I am the science pastor...

Okay... I'm hearing objections... Science and religion have nothing to do with each other. Science is all about experiments and dealing with hard facts and understanding how the universe works. And religion is about things you can't see and having faith. Right?

This type of attitude is why science pastors are needed...

Issac Newton has been called "the greatest scientific genius the world has known." Yet he spent less time on science than on theology.

And the Bible says... “The heavens are telling of the glory of God; And their expanse is declaring the work of His hands.” – that's Psalm 19

And Colossians 1:16 it says that everything, everything was created by Jesus... the Son of God... Here's what it says, “For by Him all things were created, both in the heavens and on earth, visible and invisible, whether thrones or dominions or rulers or authorities-- all things have been created through Him and for Him.”

And Isaac Newton said this. He said... “This most beautiful system of the sun, planets, and comets, could only proceed from the counsel and dominion of an intelligent and powerful Being … This Being governs all things, not as the soul of the world, but as Lord over all; and on account of his dominion he is wont to be called Lord God.”

That's Isaac Newton. He is recognized as one of the greatest scientists who ever lived. He made many huge scientific discoveries and he was not restricted in his thinking, nor his work, to just natural causes.

Since God created all things and controls all things... how can we not include God and God's word when we study the world and the universe?

Well there is really no good reason. It's just the rule to follow. It's a rule. It basically says science must presume that all causes are natural causes.

Why should this rule be accepted as valid? Well, it shouldn't be. Unless it has been proven... it has to be proven to be valid. And that has not been proven yet. It's a rule that is being arbitrarily imposed... and that's the first topic we'll be talking about here on the science pastor podcast. We'll be discussing science and Christianity... but to do that first we need to build a foundation so that we truly understand both science and Christianity.

For example, I've met a lot of people, but to date I've not met an atheist who actually understands Christianity. I've met several atheists who seem like they have memorized the entire Bible. They can quote the words... but they don't understand.

And I've met a lot of people who say they are Christian, but their words and actions show they're probably not.

Not everyone who says to Me, ‘Lord, Lord,’ --- now I hope you recognize that Jesus is saying these people believe they are Christians. They are calling Jesus just not just LORD... but they are emphasizing their supposed belief in Jesus as Lord by calling Him “Lord Lord...” Okay, now here are Jesus' words...

“Not everyone who says to Me, ‘Lord, Lord,’ --- now I hope you recognize that Jesus is saying these people believe they are Christians. They are calling Jesus just not just LORD... but they are emphasizing their supposed belief in Jesus as Lord by calling Him “Lord Lord...” Okay, now here are Jesus' words...

--- wow, these sound like incredible Christians... look at all of the incredible miracles they are doing in the name of Jesus... and what does Jesus say to them.... And then I will declare to them, ‘I never knew you; depart from Me, you who practice lawlessness.’

They're not actually Christians. Recognizing that not everyone who thinks they are a Christian is actually a Christian, that's a starting point.

Ever wondered by the History channel produces such terrible programs when the subject is Jesus, the Bible, or Christianity? I mean they do call on a lot of “experts.” You see them speaking in the program, talking about the Bible, Jesus, Christianity... the problem is, although their experts call themselves Christians, in reality they are probably not... so they don't actually understand the Bible or Jesus or Christianity.

What we are doing here is defining the different types of beliefs... so we'll know what we are dealing with as we're talking about science and Christianity. By the way, I have a background in engineering... and we engineers we're a rational bunch of people, logical... and we like to define our terms.

Defining terms and having them defined correctly is important... if we are actually going to communicate with each other. We have to be using the same definitions for the words we are talking about. Otherwise I'll say something and you will totally misunderstand it because you define your words differently.

So let's start by talking about God. Let's get to know God a little bit better. One of the most common objections to God is that... it is impossible to do science if God is involved and supernatural miracles are possible. The logic is, how can we study the natural world, if God can step in at any time and do things in contradiction to the natural laws.

By the way, that is the definition of a supernatural miracle... it is something that is done in violation of the natural laws.

For example, how can we study and understand radioactive decay, if, at any time, God can step in and change the rate at which radio isotopes decay.

Good question, right? But, if you understand who God is, and you understand God's character, what His character is like... if you have defined God correctly... you have the answer to that question. So let's talk about God...

There are several things you need to understand about God and supernatural miracles...

First... God is the one who created the natural laws... and He can violate them any time He wishes. He makes the rules and He can change the rules. He has the authority and power to do that. Why? Well, He created everything. He owns everything.

Here's an example: let's say I decided 25 years ago to lock the front door of my house and everyone who wants to come into my house has to come in through the garage. It's been that way now for 25 years. I have the right to do that. I own the house. I can do that.

But then my family, whom I haven't seen in 25 years, comes visiting. Can I unlock the door and let them walk in and out of my house through the front door? Of course I can. I own the house. Meaning I have the authority to do so. And I have the key, meaning I have the power to do so.

And after they leave can I lock the door again? Yes. It's my house, and I have the key. I can do that.

And it's the same with God. He made everything, including the natural laws. In fact, He is the one who ensures that the natural laws are unchanging. If we continue reading... we were reading in Colossians chapter one, we read verse 16... if we go on and read verse 17 we see that...

Jesus, the Son of God, is before all things, and in Him all things hold together.

There is another important fact about God. Scientists don't need to be concerned that God will do something supernatural and change things right in the middle of an important experiment or observation. God does not normally act supernaturally. That's not what He normally does. God has only acted supernaturally during a few limited, very important periods of human history... and there were major reasons for His doing so. It's not arbitrary.

For example, the first time God acted supernaturally was at creation... when He created everything by speaking it into existence. And that was a very unique time in history. It's not going to happen again.

The second time God acted supernaturally was during Noah's Flood... again a very unique time that will not happen again.

The remaining times when God has acted supernaturally were times when He has provided evidence to authenticate His messengers, or authenticate Jesus as being God. The miracles Jesus did were not arbitrary, they were not simply out of compassion... yes, Jesus was being compassionate in healing people, but more importantly the reason why Jesus did those miracles was to prove that He was God. And to prove what He said was true. Jesus did things that only God could do.

So, outside of creation and the flood, there were four major periods when there were supernatural miracles... when there was a time a messenger needed to be authenticated as having come from God.

There is one time period that has not yet happened when God will be acting supernaturally... that's the end times. That's it. So does God still do miracles today? Well the answer is... yes. But they are generally not supernatural miracles... they are what are called providential miracles.

A providential miracle is one that does not violate the natural laws.

So how does a providential miracle work? God uses what are called “means” to accomplish the miracle. For example, a doctor performing an operation to save the life of an accident victim... the “means” God uses is the doctor and medical staff, and medications, and medical equipment. God may even guide them to function way above their normal skill level. They are the means God uses to heal that accident victim.

God is not arbitrary. God does not cause confusion. In fact God tells us, in 1st Corinthians 14:33 that He is not a God of confusion and disorder... He wants us to understand His creation... and so He upholds and maintains stability in His creation so that we can understand it.

So this is our first program... we've started on our foundation. Do you see the need for a science pastor now? This time we've mostly talked about God and a little about science. Some our our shows will be completely about science. Others will be completely about God. I want to help pastors to have a better understanding of science. And I want to help non-Christians, maybe people who are really into science to have a better understanding of God, and know the gospel and know what scripture says and know the character of God. And I hope Christians also will gain a better understanding of both God and science... that's what a science pastor does. That's why we're here.

My name is Steve, I'm the science pastor... thanks for watching. We'll see you next time.

Do Miracles Mean The Bible Is A Fairy Tale?

Was Jesus' Resurrection Real or Fake?

Do Babies Go To Heaven?

Can We Know God Exists?

The Age of the Earth - Helium In Rocks