Global Flood | See All The Videos. Go to the: 30 Second Video Menu

What Happened to the Dinosaurs?

We now have the answer!

Forensics Reveal The Cause of Dinosaur Death

Dr. Mark Aramitage has been doing first-of-its-kind work. As a result of a belief in evolution, when fossil bones were prepared, they were done so in a way that destroyed soft tissue. It was a known "fact" that soft tissue could not last millions of years, so why worry about trying to preserve it? Dr. Armitage took a different approach and intentionally looked for soft tissue in dinosaur bones. And he found it! Lots of it! He now estimates that 90% of all dinosaur bones have soft tissue.

Soft Tissue: What Do We Mean?

Bones are hard, and they are typically what we think of when fossils come to mind. Soft tissue includes almost everything else. And because it is soft, it decays very rapidly. It is impossible for soft tissue to last even a million years, let alone the 65 million years since the last dinosaur supposedly died. 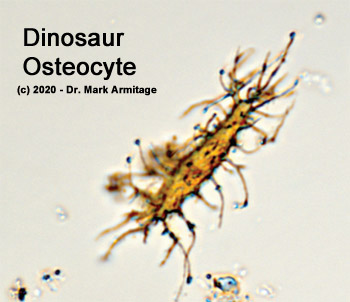 A little know fact is that most dinosaur bones are not fossils. They are still the original bone. For example, dinosaur "fossils" from Montana's Hell's Creek formation are famous for stinking... they smell. They literally smell rotten because they are still decaying.

One of the first things Dr. Armitage discovered were osteocytes. These are the cells that make up bone. They should not be there. They can not last millions of years. But... as he looked through his microscope, there they were. This alone was sufficient to prove the "fossil" triceratops horn he was studying was not millions of years old.

But There Is More

Others had already found red blood cells, veins, and collagen in dinosaur bones. But, what Dr. Armitage found next was astounding... nerves!

"We were actually seeing the nerve bundles that travel with vessels and veins inside the dinosaur bones... This is a world-first discovery. It means that none of these dinosaur bones can be old." - Dr. Mark Armitage 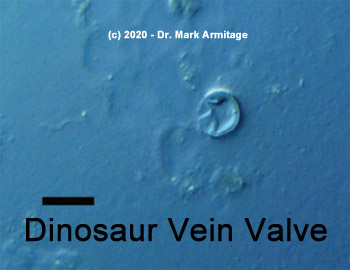 He also found vein valves. These are tiny one-way valves inside veins that prevent the blood from flowing backwards between heartbeats. These valves are very delicate and cannot survive millions of years. However, what was more astounding was that, bacteria trapped in one of the valves was still alive! Dr. Armitage is not a microbiologist, so he does not have the tools to study bacteria, but he did film them. Living bacteria trapped in a blood vein when the dinosaur died! (Note: It is known that bacterial can create a hard shell that allows them to survive in harsh conditions for possibly thousands of years. Bacteria have been extracted from ancient amber and activated -- brought to life).

What Killed the Dinosaurs?

Dr. Armitage was looking at dinosaur bone fossils in ways no one had ever done before, and that led to another incredible world-first discovery... blood clots in the bone-vascular channels. Not just a few. They were common, including in the Haversian canals and pushing into the connecting Volkmann's canal. Separate blood cells are seen adhering to the vessel walls. Why is this significant?

(1) Blood clots are additional proof the dinosaur died recently, in the range of thousands of years ago, not millions of years.

"It has been discovered that human victims of drowning suffer from clotting throughout their bodies including clots inside the bones as a result of the trauma associated with asphyxiation in water. We have observed clotting in dinosaur bones from five different dinosaurs to date." 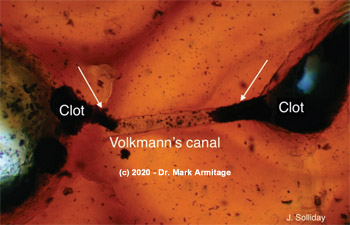 The following are links to Dr. Armitage's published papers in this area of study:

"Soft Sheets of fibrillar bone from a fossil of the supraorbital horn of the dinosaur Triceratops horridus" - Acta Histochemica, January 2013 (Volume 115, 2013)

Images used on this page and in the video are copyrighted. They are used here with the permission of Dr. Armitage. He may be contacted through the Dinosaur Soft Tissue Research Institute